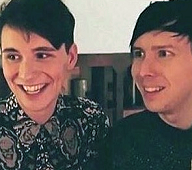 This is my last batch of replies. Loved reading the discussion here, I seriously enjoy these longer posts so much.

huphilpuffs wrote: ↑Sun Nov 04, 2018 7:40 pm I do think that there was still a change in how they, especially Phil, approach these videos. It's not specific to baking, but it's always amazing to see how much less Phil seems like he's trying to put on a show now vs back then.
Also slightly related and I know it's been mentioned before, but Phil dismissing Dan when the baking was done was so odd to hear.

Your whole post is super spot on, but I'm quoting this because I love to think about it and you put it so well. Phil is definitely not trying to put on a show as much as he used to do, and I feel like the change is visible even if you compare 2016 and now, let alone 2011 vs 2018. I love how Phil is slowly becoming Phil Lester, as opposed to AmazingPhil. It makes me wonder if he will ever rebrand too, as in ditch the AP name and just go as Phil Lester like Dan does now.
And yeah, Phil dismissing Dan? That would never happen now. AP is almost as much Dan's as it is Phil's

ame wrote: ↑Sun Nov 04, 2018 9:29 pm this child was bouncing off the walls while phil seemed like his babysitter that was just there to get paid. idk if sounded harsh but i guess my perspective REALLY changed a lot throughout the years....


ame wrote: ↑Sun Nov 04, 2018 9:29 pm if you think about pre-monster pops era, phil was usually the tsukkomi with dan, usually bouncing off the walls, being the boke. but now the roles are reversed. phil is usually the one being a little shit and dan has to reprimand/nag him. of course, dan does still turn into a boke sometimes and phil its not a concrete thing, since both of them take turns being a little shit towards each other.

I always love thinking about this part of their on-screen dynamic. I am familiar with these terms, and I love to analyze their videos as to who is who this time around. And you're right, Dan usually plays the role of the one that is just done with everything, while Phil is being a little shit. I feel like this suits their actual personalities better.


obsessivelymoody wrote: ↑Mon Nov 05, 2018 2:21 am I think they're both staged to some degree since baking requires lots of prep, but the easter one was more so imo. We talked about the video being edited out of order and their different batches when it came out, so I think that's more of an indication that there are always going to be staged bits of these videos so they don't flop completely. I think 2018 Dan is about a million times louder than 2011 Dan, but far more comfortable with himself. Phil's louder too, but in a way that's more Phil Lester than AmazingPhil. I think their reactions are more genuine to a degree in the easter video because while they're pandering to the audience, it feels more them and less like a forced reaction to try and make the video more interesting.

I never noticed the editing thing! Makes me wonder how many more things I miss, even though I rewatch their videos a lot. I watch most vids at least 2-3 times. I totally agree that they seem more comfortable with themselves, and when you say they're pandering to the audience, I agree, but again... I wonder how much is pandering, and how much is their actual humor that they just know will go down well. I feel like over the years, their humor became much less forced and they just dropped their filter. I love it.
Top